A sport application that will allow users to test their knowledge on the biggest football stage in Europe the Uefa Champions League. The application will display a question like for example who scored the winning penalty for Manchester United in the 2008 final?, Which player has won the Champions League the most times ? etc. Below the question will feature 3 options in which the user has to choose one which will determine if they have chosen the right answer. If they have chosen the right answer the option will change colour to green or if they have chosen the wrong option then red. Users will also be able to test their knowledge on some of the top teams that have featured in the Champions League like Barcelona, Real Madrid, Liverpool, Manchester United etc.quizzes, tests, soccer, soccer games, entertainment, knowledge, football, app 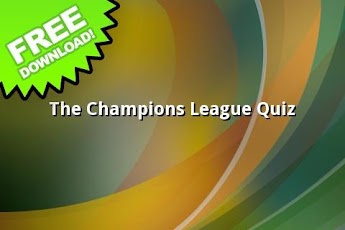 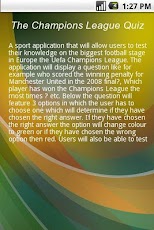