What is Islam?Recent world events have raised a general curiosity about Islam and its teachings. Tons of questions have been raised about Islam: What is Jihad?, is it a struggle to achieve peace or is it related to terrorism?, what about women? Second class citizens or equal to a man? Four wives?,What is the Quran all about? Who is this Allah that Muslims worship? Etc. etc.Though information about Islam is readily available online, not every website is teaching authentic information and not every scholar appearing in the media is reliable, thus the need for an app about Islam that supplies detailed info is authentic and is easy to use.Brief Introduction to Islam:Islam is not a new religion, but the same truth that God revealed through all His prophets toevery people. For a fifth of the world’s population, Islam is both a religion and a complete way oflife. Muslims follow a religion of peace, mercy, and forgiveness, and the majority have nothingto do with the extremely grave events which have come to be associated with their faith. Application contains following main topics1. Common Questions2. Islam for Peace3. Hot topics4. Ask your question5. Quranic verses6. Glossary of Islamic terms7. Sayings of Prophet Muhammad(p)8. Free stuff9. Audios10. Videos- Common Questions1. What is Islam?2. ISLAM: The Religion of All Prophets3. What non-Muslim scholars say about Islam?4. Who is Allah?5. The One True God6. Who Do Muslims Worship?7. Prophethood in Islam8. Life of Prophet Muhammad (Peace be upon him)9. Prophet Muhammad (Peace be upon him) – Mercy to Mankind10. The Most Influential Person in History11. The Message of Prophet Muhammad (Peace be upon him)12. What non-Muslim scholars said about Prophet Muhammed (Peace be upon him)13. Who is Your Role Model?14. Prophet Muhammad (Peace be upon him) – The Only Hope of Mankind15. Jesus (Peace be upon him)16. How Did Jesus’ People Know Him?17. Who was Jesus?18. The Moral System of Islam19. Head Covers (Hijab)20. Life After DeathIn "Hot Topics" following hot topics related to Islam are covered1. What does Islam say about Terrorism?2. What is the meaning of jihad?3. Human Rights in Islam4. What is the Islamic view on suicide, "mercy" killings and abortion?5. Status of Women in Islam6. Four wives?In "Sayings of Prophet Muhammad(p)" you will see few samples of sayings of Prophet Muhammad(pbuh)."Free stuff" is only for our non-Muslim guests, following literature will be provided for this requestbased on availability.1. Quran – English translation – Saheeh International translation (no Arabic text)2. Biography – Biography of Prophet Muhammad, peace be upon him.3. The Message – Magazine4. Book – Clear your doubts about Islam (Question and Answers about various Islamic topics)In "Audios" following topics are covered.1. Islamic Concept of God – Dr. Bilal Philips2. Real Meaning of Peace – Sheikh Abdur Raheem Green3. The True Message of Jesus – Dr. Bilal Philips4. The Solution for Humanity – Dr. Bilal Philips5. Muslim Contributions to Science – Imam Shabir Ally6. Islam Women’s Ideal Liberation – Yvonne Ridley7. Muslims Misguided or Misunderstood – Gary Miller8. How to get peace and joy in life – Sheikh Yasir Qadih9. Why believe in the hereafter? – Abdullah Hakim Quick10. The Truth about Holidays – Abdullah Hakim QuickIn "Videos" following topics are covered.1. Proof of Islam2. Preservation of the Qur’an3. Oral transmission of the Qur’an4. Preservation of the sayings of the Prophet5. The miracle of the Arabic language6. Stories of those who heard the Qur’an7. Embryology in the Qur’an8. Scientific facts in the Qur’an (Part 1)9. Scientific facts in the Qur’an (Part 2)10. Historical facts11. Witness of the people of the Book12. Muhammad(s) in the Bible (Part 1)13. Muhammad(s) in the Bible (Part 2)14. Prophecies of the Prophet(pbuh)15. Signs of the Last Day 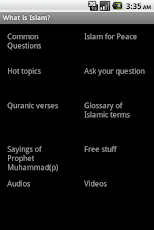 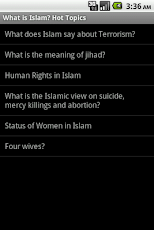 Say it with Ruzzle