Death by Doodle in Doodle Army Boot Camp from Appsomniacs 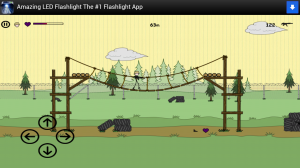 When you first fire up Doodle Army Boot Camp you’ll get a brief tutorial from Sarge which is hilarious and helpful. After maybe a minute or two (and a tragic incident) you’re set loose on the battlefield to kick a lot of ass. Basically you just want to tear ass through the game, pushing forward while pulling the trigger and leaving bodies in your wake. It won’t be easy as you’ll be under constant assault, but it will be a whole lotta’ fun. The controls basically consist of moving left to right, jumping and crouching. You can fire your weapon of choice through a couple of different setups and the controls are very easy to use. Doodle Army Boot Camp is more than a simple run n’ gun game as there are bosses, unlockable characters, more bullets than you can shake a stick at, and blood by the boatloads. Yeah… it’s a pretty cool game. There’s a free version of the game that lets you get your feet wet and if you like what you see (you will) you can snag the full version simply dubbed Doodle Army for only $0.99. I’ll have a full review of this bloody little shooter next week, until then I highly advise you to check it out if you’re in the mood for carnage. Doodle Army Boot Camp