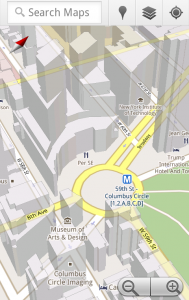 Google has just released an update of its Maps for Mobile Android app boasting of two major new features – 3D interaction and offline reliability. The new version of this said Android app aims to change a couple of things which were not addressed  by previous updates to the app – particularly the flat, north-up map and the need for strong Internet connection. The first new feature is a  pretty cool 3D map exploration. The app is now usnig vector graphics to dynamically draw the map on your Android phone. With the 3D feature, you will now be able to interact with the maps – allowing you tilt, rotate, zoom in, and use the cool compass mode in 3D graphics. Another new feature of Google Maps for Mobile Android app is the improved offline reliability for maps. What this means is that the app will start caching areas you visit the most so that when you have to pull it out, you don’t have to rely to reliable internet connection which may not be present everywhere you go. In other words, the app will provide you with the map offline provided it has been cached before. Likewise, the new Google Maps for Mobile Android app also now has offline rerouting. This is useful if you use Google’ Maps Navigation, Google’s free turn-by-turn GPS navigation feature. What this feature does is to keep you connected to your route even when you lose internet connection for awhile. Google Maps for Mobile 5.0 Android app is now available from the Android Market. It supports Android 1.6 or higher devices.