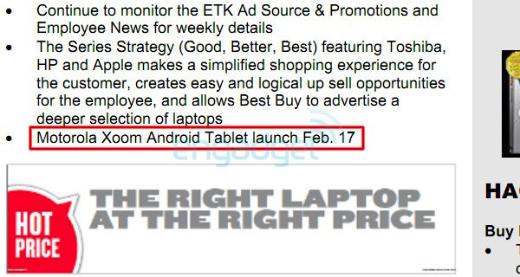 Earlier today, potential pricing information regarding the upcoming Verizon Wireless tablet with Android 3.0 was leaked. Even with pricing known, many people were left wondering about the launch date of the tablet and it seems Engadget received a reliable tip containing the crucial piece of information. If the rumor pans out, you may want to pony up $800 by February 17 because Best Buy is expected to begin selling the device at the point in time. According to the internal Best Buy document, it will have the Xoom table in stock on the 16th, but will officially begin selling it the next day. Of course, Verizon Wireless or Motorola has yet to officially confirm a price point or launch date, but the reports we’ve read over the past few days seem pretty legitimate. Should anything new break, we will keep you posted.