Uno is a card game that’s been around for ages, and thanks to Gameloft’s UNO & Friends you can now get your UNO on with some buddies using your favorite Android device. 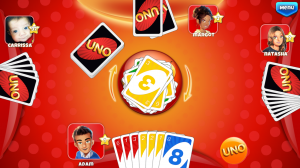 UNO & Friends is a social version of the famous card game, complete with power-ups, in-app purchases, and Facebook integration. The gameplay is just like you remember it, and getting into a game is as simple as hitting play. The only way you’ll be able to play against your friends is through Facebook, but you’ll still be able to get into random matches if you prefer to go anti-social. The biggest change to the game is with the power-ups and customization options. You can buy several stylish UNO decks or add special effects to your card game to liven things up. You can also change the back drop, and there are 6 different power-ups you can purchase to use in the game. UNO & Friends has some cool features, but you’re going to have to come out of pocket to get several of them. 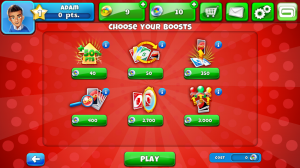 UNO & Friends is a stylish game that does a good job of modernizing a classic without overdoing it. The only knock on the game is with its lack of Google+/Gmail integration and Game Services. This can be fixed down the road, but for now you’ll only be able to pick your opponents via Facebook. If you want to give it a go, you can pick up Gameloft’s UNO & Friends for free on Google Play.

See the Motorola D11 talk about the X Phone here!
Twitter updates: Tweets are now larger than life on mobile