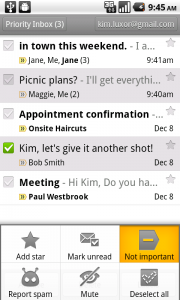 With Gingerbread still a few weeks away from official release, even the folks at Google couldn’t wait to roll out some Android 2.3 features to their own Android apps. One of these apps which was just updated to bear some of the features that will be brought by Android 2.3 is the Gmail Android app which is now in version 2.3.2. Gmail Android app 2.3.2 now has a better Priority Inbox view. If your a regular Gmail user you’d be familiar with Priority Inbox. If not, well it’s a pretty nifty feature that automatically selects important emails that come into your Gmail Inbox. The app now lets you archive and delete conversations or mark them unimportant from the Priority Inbox view, regardless of whether you’ve read them or not. This Priority Inbox also gets a notification feature via pop-up notifications that appears on the top tab of your Android phone’s homescreen, via vibrate or ring. You can set notifications via Menu&gt;Settings&gt;Priority Inbox. The new Gmail Android app also lets you easily switch between reply, reply all, and forward while composing your reply message. You can also now send email from using another webmail provided you’ve set it up in the desktop version of Gmail. Finally, the new Gmail Android app also now allows you to reply to messages, inline. Gmail Android app 2.3.2 is available now as a free update from the Android Market. You can also grab it now via scanning the QR Code below. via Google Mobile Blog