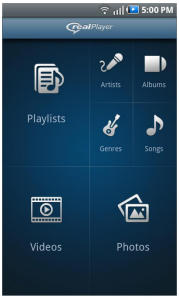 One of  the best alternative media player for Android, RealPlayer Android app has just been upgraded and is now available from the Android Market, still as a free download. The updates were brought about by feedback received by the developers from those who have downloaded the version of the Android app. The upgraded version of RealPlayer Android app still offers an easy way for you to control and manage all of your music, videos and photos. Among the major new features include:

Sprint Reaffirms its Commitment to Android 2.2 On the Epic 4G
HTC ThunderBolt and Motorola Xoom Prices Leak, Expected to Cost $250 and $799