Speaking of hilarious Wednesdays, today’s news is as funny as it gets. After the recent reports of Google search-engine bias, when the results for the term “Trump” were delivered from 90%+ left-wing news sources (Nearly 100% of Google Search Results for Trump News from Left Wing Sites), with CNN being the main “culprit”, followed by the usual suspects (NYT, WaPo, USA Today etc), President Trump warned the tech behemoth on Twitter about the issue (Internet Regulation Incoming: Trump Warns Tech Giants, Accuses Google, Facebook, Twitter of Bias)

And what do you know: since irony is long dead and buried on the left, the top trending story on Google News on Wednesday was…yeah, you got that right: a CNN piece claiming that Google’s algorithm is not rigged. This is not a joke, unfortunately.

Thank you James Taranto, you’ve won  the Internet today. Here’s what started all this extravaganza:

….results on “Trump News” are from National Left-Wing Media, very dangerous. Google & others are suppressing voices of Conservatives and hiding information and news that is good. They are controlling what we can & cannot see. This is a very serious situation-will be addressed!

Here are some articles trending today on Drudge:

How Media Companies Are Suppressing Speech…

PAPER: We should all be worried…

Mark Levin was asking tonight why CNN is still on the air considering their ridiculously low ratings. It’s an excellent point that’s just baffling. I’d like to see an investigative report on all the financial and other associations CNN has. Who’s funding this propaganda machine anyway? Are there CIA ties? Obviously, if CNN says Google isn’t rigged, then you know it’s rigged. Somebody in the Justice Department ought to dust off the Sherman Antitrust Act. It’s a fair argument that Google, Facebook and Twitter are the dominant (basically the only) players in their specific markets. At some point, not too far into the future, questions about their monopoly on public information flow is antithetical to a free society. If you think this is going to be left untouched, you are delusional:

President Trump: With respect to Google and Twitter and Facebook there is a big difference. And in fact I hear that they are holding hearings in Congress over the next couple of weeks and I think it’s a very serious problem because they are really trying to silence a very large part of this country and those people don’t want to be silenced. It’s not right. It’s not fair. It may not be legal. But, we’ll see. We just want fairness. 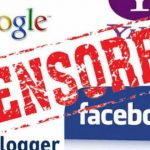