The first time we reviewed CliqueIt Android app, it was still in beta and yet we thought that the photo sharing app has the potential to become a successful social app for Android. Back then, the app has some minor bugs that needed to be fixed. So recently, Recursion Software finally took CliqueIt out of beta and the updated version is now available, still as a free download from the Android Market.

In case you were not able to read our previous reviews, let me walk you through the app’s major features. Essentially, CliqueIt is a photo-sharing application which is probably nothing new to all of us.You’ve probably encountered several photo-sharing Android apps before with features that are similar to what CliqueIt allows you to do.

What sets CliqueIt apart from other Android photo sharing apps is the fact that it lets you not only share photos in cliques and join other cliques but it also allows you to create your own cliques. Even better is the fact that you can make cliques you created as public or private. Private Cliques can only be accessible to members you have invited to join.

Another thing that you will appreciate from this app is that it has an easy-to-use interface. The first time you fire up the app, you’ll be asked to create a new account. Once you’ve created an account, you simply select from three options on the app’s main menu, namely – create clique, find clique or accept invitation.

Once you’re inside a clique, whether your own or a public clique, you will be able to do three things – check your inbox if there are photos shared to you. You can then opt to save the photos to your phone’s SD card or trash it. Inside a clique, you can also view your photo gallery or take new photos that you want to share to a private or public clique.

As it is right now, CliqueIt is a well-built app with all its functionality and features already working pretty robust. The app doesn’t suffer from the lag that we experience before. Currently, there are several public cliques already established which you can join in to get you started into using the app. After participating in public cliques, you can then proceed to creating your own clique and start inviting people to join your clique. 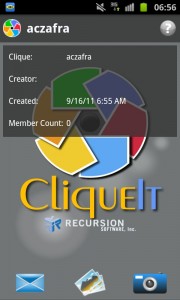 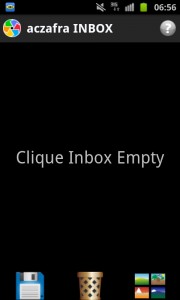 CliqueIt suits well those who want to be in a mobile social group but does not want too many people seeing the photos they’ve shared. It’s good for hosting private cliques to give access to people that you’ve chosen to receive photos you’ve shared.

Still, the success of CliqueIt will remain on the influx of new users who will be getting the app installed on their Android phones and who will actually use the app.