Learn Astrology Terminology- 400+ Multiple Choice Quizzes- Flash Cards- DictionaryAstrology quizzes, flash cards, and a dictionary of over 400+ Astrological terms makes the perfect study partner. This handy Android app from Little Apps keeps your user interface simple and straightforward; the only complex aspect of this app is the content itself. Challenge your knowledge with multiple choice quizzes which show you the correct answer if you miss a question. Research terms you don’t know with the specialized dictionary. Study for upcoming tests and master your Astrological knowledge with term-by-term flash cards. The Astrology Quiz (Flash Cards & Dictionary), made for students on the go with Android phones, applies a simple, easy-to-use structure to a particularly rich and amazing subject.Astrology is considered a pseudoscience or superstition by the scientific community, for its lack of statistically significant predictions. One hypothesis is that the continued faith in astrology is explained by a cognitive bias. In 2006 the U.S. National Science Board published a statement identifying Western or tropical astrology, along with ten other practices or beliefs, as "pseudoscientific". In India, vedic astrology is taught in some universities as if it were a science.Numerous traditions and applications employing astrological concepts have arisen since its earliest recorded beginnings in the 3rd millennium BC. Astrology has played an important role in the shaping of culture, early astronomy, the Vedas, and various disciplines throughout history. In fact, astrology and astronomy were often regarded as synonyms before the modern era, with the desire for predictive and divinatory knowledge one of the motivating factors for astronomical observation. Astronomy began to diverge from astrology after a period of gradual separation from the Renaissance up until the 18th century. Eventually, astronomy distinguished itself as the empirical study of astronomical objects and phenomena.The word "astrology" comes from the Latin term astrologia ("astronomy"), which in turn derives from the Greek noun ??????????: ??????, astron ("constellation" or "celestial body") and -?????, -logia ("the study of"). The word "starcraft" has also traditionally been used to mean astrology. (Wikipedia)This app was created for you. With over 400+ Multiple Choice Quizzes, Flash Cards, and a handy Android sized Dictionary, you’ll be able to maintain your Astrology education on your schedule. 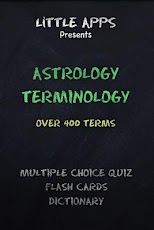 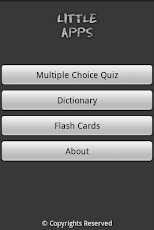 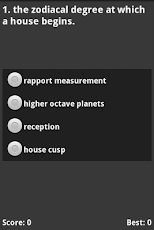 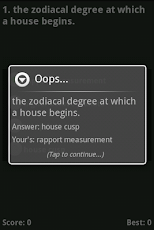