Save humankind from extinction in this cinematic space adventure.The year is 2235. An alien race known as the Krahen has invaded our galaxy. After many weeks of continuous space battle the human alliance succeeded in annihilating the first wave of the Krahen attack, forcing the remaining alien fleet to retreat deep into the nearby systems.The Krahen, although defeated, managed to spread a deadly virus to the Earth atmosphere. The virus effects are so intense that prohibit the alliance from regrouping in time in order to stand against imminent alien attacks. Running out of time, the alliance command has issued a high risk seek and destroy mission :The powerful prototype droid spacecraft ARK-I should infiltrate behind enemy lines and extract the virus antidote.GOALTry to break all blocks in every round to get scores as high as you can and advance to the next level. The ultimate goal is to extract the Krahen antidote and save human kind from the alien menace.FEATURES* Cinematic story line* Appealing visual effects* Photo-realistic background graphics – Deep space, Nebulae and Galaxy photos as taken from Hubble Space Telescope* Deep space, “psyonic” music themes* 3 episodes that conclude the main campaign in over 100 levels* Free play – Random level generator for unlimited gaming pleasure* Global Leader-board and Achievements in addition to local scores* 3 game-play difficulty levels that modify the speed of the energy ball, the efficiency of all offensive weapons and the energy levels of all blocks* Sophisticated point system – Points earned depend on the selected difficulty level, the destroyed block type and the effectiveness of the weapon used to break the specific block* Sophisticated weapon system – Offensive weapons damage capabilities vary depending on the selected difficulty level. Furthermore certain block types can only be destroyed using certain weapons* Sophisticated upgrade system – In game upgrades can have accumulative behavior in terms of time and effect 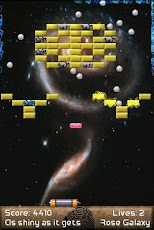 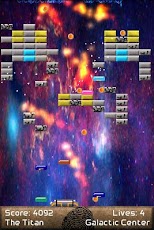 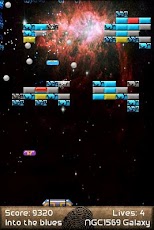 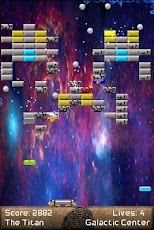