The Carpenter’s CalcPad is designed to behave as a calculator, allowing you to to press the same buttons in the same order you would a regular calculator. However; this calcpad provides much more functionality for those that need it. For example, the carpenter’s calculator gives you the ability to enter numbers in feet and inches with decimals or fractions, keep track of multiple running totals, change previously entered calculations, insert new calculations into a running total, add labels for variable substitutions and much more.The calcpad also has a spindle/baluster/board spacer for planning staircases, railings, banisters, decks and other projects. Just enter the details of the the project (which can include two separate distances between balusters) and it will provide a set of board configurations to choose from. After you choose a configuration it will generate a starting/stopping location, plus a label, for each board and display the results in the calcpad. Afterward, you can modify the spacing or change individual boards in the calcpad as field measurements require. Instead of generating spacing requirements, it’s also possible to visualize the project as an overlay on preview camera of your device.After the calculations are complete, the contents of the calcpad can be saved to multiple files and reloaded for later use.Enhancements and bug requests are appreciated, but I can’t guarantee that any requests will be addressed.Listed below are instructions for few common tasks.Recalculating totals:1. Touching the calcpad or touch the ‘=’ buttonDivide two numbers:1. Type the first number2. Touch the ‘/’ button3. Type the number to divide the second number with4. Touch ‘=’Minus sign instead of subtraction:1. Long touch the ‘-‘ buttonShowing the soft keyboard for variables:1. Touch the ‘K’ buttonUsing a fraction:1. First type the whole number part of the fraction2. Touch the ‘space’ button3. Type the numerator of the fraction4. Long touch the ‘/’ button5. Type the denominator of the fraction6. Optionally use the ‘" buttons to use feet or inchesUse a variable:1. First ensure that you have made a variable by typing a label at the end of any prior line.2. Touch an operation (+-*%/) button3. Touch the ‘variables’ button4. Choose a variable from the list instead of typing a numberInsert an operation (+-*%/=) into a running total:1. Touch the line for which you would like to add the operation after2. Touch the operation button you would like to insert3. Type the number with or without the ‘" labels4. Touch the calcpad to recompute the totalsChange an existing line and total:1. Touch the line that you would like to change2. Use the number, space and backspace buttons to change the number as needed3. Touch the calcpad to recompute the totals 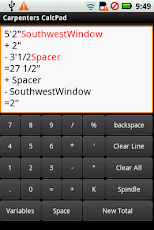 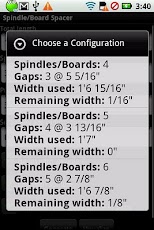