Chuck Norris Jokes and FactsThe Very best of newest and funniest Chuck Norris Jokes and facts. An ultimate humorous collection of handpicked jokes and funny facts about Chuck Norris and his famous roundhouse kick:- When Alexander Bell invented the telephone he had 3 missed calls from Chuck Norris.- Once the cop pulled over Chuck Norris….the cop was lucky to leave with a warning.- Chuck Norris is responsible for China’s over-population. He hosted a Karate tournament in Beijing and all women within 1,000 miles became pregnant instantly.- Chuck Norris counted to infinity – twice.Chuck Norris jokes and facts originally started appearing on the Internet in early 2005. Conan O’Brien’s Chuck Norris jokes on Late Night with Conan O’Brien (which generally center on Walker, Texas Ranger) have been seen as an inspiration for the fad. The exaggerated style of these facts is similar to a recurring Saturday Night Live sketch called "Bill Brasky". Due to the popularity of this phenomenon, similar jokes have been created for various other celebrities, as well as fictional characters.Now your phone has an ultimate protection from any thread, no virus can survive on phone with Chuck Norris :). Choose your favorite joke and send your friends SMS joke or share it via Facebook, Twitter, WhatsUp or email the favorite Chuck anekdote via email.Funny quotes, funny jokes and lines, anecdote. 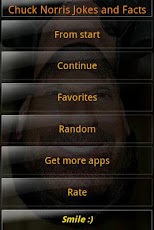 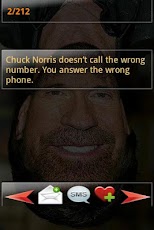