Go Buggy Math consists of a set of math games that teaches basic addition for children in kindergarten and 1st grade (ages 5-7). It uses fun, encouragement, and math strategies to build math skills and confidence. This app is for parents who want their kids to be good at math.The basic math strategy taught in this app is to break down numbers into other numbers that are easy to work with in your mind.For example, 9 + 6 is tough for kids learning to add.However, if we break down the six into 1 + 5, the problem is much easier.9 + 6(9 + 1) + 510 + 515!**Beta Version** Please send issues/comments to gobuggymath@gmail.comWith practice, your kids will have these problems/answers memorized which will make harder problems much easier. The skill of breaking down numbers to simplify calculations will be used for more difficult addition, subtraction, multiplication and division problems. Finally, the ability to do multiple steps of math in their heads without a pencil will make them much better at solving all math problems because they can look at a problem and run through various steps to see what works and what’s simple before plowing through the problem- a skill that will help them through high school math and beyond.Each game can be played with a timer to build speed and confidence or without a timer for learning and practice.Enhancements for this app coming in the near future will include more animations/sounds, additional levels of multi-digit addition (at least through 3 digit numbers), and possibly more/better tutorial videos.Have your child spend about 5 minutes, 3-4 times/week working on the games in this app. You can have them play it when you’re waiting in line, during a car ride, or before they play Angry Birds. Consider doing it regularly such as during car rides to school/practice, prior to heading out to play, or before their favorite video; it’ll be easier to remember and they’ll get used to it.Math is not difficult. There are not many rules/facts that we have to learn, especially compared to learning English. Watch your children learn to read and write- there are thousands of rules and special cases to memorize. Also, consider that we are surrounded by English- spoken and written nearly all of our waking hours. How often do we use/ hear math? Five minutes per day with Go Buggy Math…Future enhancements or apps will include subtraction, multiplication, fractions, division and algebra. I hope to also create a pre-school version which will help teach counting through the teens and number recognition.Go Buggy Math has been produced with the help of Allison (6) and Ryan (4) who have helped in the development and testing of this game as well as the instructional YouTube videos. 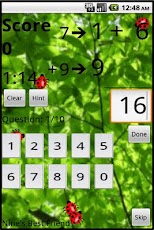 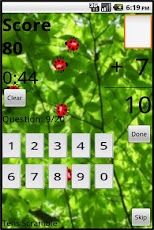