Plato was born in Athens, Greece, in around 428 BC. The son of an influential family, Plato would probably have been expected to play a significant role in the politics of Athens in later life, but, as a pupil of Socrates, his interests became more philosophical. Before listening to this audiobook about his life and contribution to philosophy, please ensure that ‘text to speech’ is enabled (from the Settings menu of your device), prior to opening and playing this audio-short. Classic App Audiobooks make available the written works of the best known philosophers in audiobook format, allowing people to acquaint themselves with the conclusions drawn by important philosophical figures over the course of history, in the face of life’s most perplexing mysteries. Each audiobook offers the listener the opportunity of comprehending and understanding the contributions of some of the most significant thinkers in the realm of philosophy. In each of thirty presentations, Classic App Audiobooks presents an account of the life, work and thoughts of the particular philosopher in focus. The full series covers the following philosophers: Aquinas, Aristotle, Augustine, Bacon, Bergson, Berkeley, Descartes, Dewey, Fichte, Hegel, Heidegger, Hobbes, Hume, Husserl, James, Kant, Kierkegaard, Leibniz, Locke, Mill, Nietzsche, Peirce, Plato, Russell, Santayana, Sartre, Schopenhauer, Socrates, Spinoza, Wittgenstein. 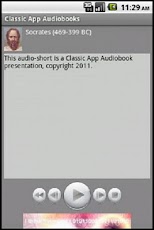 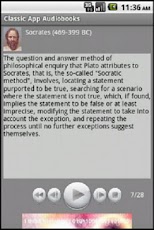