Crush the Monsters is another Android game made for those of you who love medieval times, monsters and dragons, sorcerers and kings. As you can imagine, this is a fun game to play when boredom strikes, being very well designed and with awesome graphics.

This funny looking arcade game monetizes on the eternal struggle between good and evil and it will put your reflexes and reaction time to a gruesome test. The monsters are actually goofy looking, they’re not very scary at all and you will have to defend your kingdom from those pesky looking creatures.

There are 6 kinds of monsters, two game modes and up to 48 levels set across various chapters. The game play itself is pretty easy to handle, making for Crush the Monsters playable even by small kids. 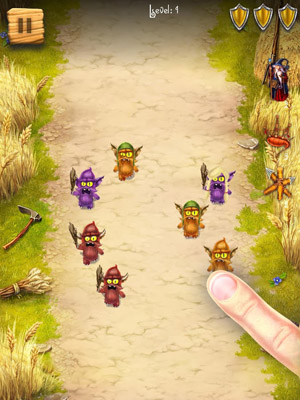 If you’re a fan of this game genre, you’ll have a smashing time poaching the monsters with your mighty sword (your finger, that is). Because, that’s all you have to do, point and “shoot” with your fingers and watch the monster drop!

Even if they’re goofy looking, the tiny monsters are actually very “evil” (but not very clever after all, they’ll fall by the hundreds until the end of the game) and you’ll have to battle hard to protect your Kingdom. During the battle, you’ll have to protect your civilian population, thus receiving various bonuses.