If you just can’t get enough of those Angry Birds, today’s your lucky day as Rovio has finally brought Angry Birds Friends to Android. Yup, it’s another Angry Birds game although things are a bit different this time around. 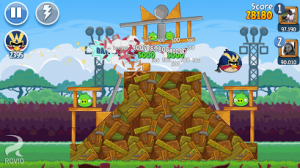 Angry Birds Friends is a social version of Angry Birds where you can play, and see how your score stacks up against others online. The scores are tracked through Facebook which means you’ll be able to play with your friends regardless of their device as long as they are playing the Facebook game or have the Android/iOS version installed. The gameplay basically stays the same, but Angry Birds Friends does bring a few new things to the table with tournaments, challenges, gifts, and other sorts of perks. The coolest feature is the fact that the app automatically syncs up with Facebook meaning you can start a tourney on Facebook, and finish it on your favorite mobile device. I’ve made it no secret that I’m not a big fan of Facebook, and the whole Angry Birds thing grew tiresome a long time ago. Except for Angry Birds Star Wars that is, ABSW will never get old for this geek. Needless to say, I haven’t played Angry Birds Friends, but it looks to be a great game to get if you’re social and like playing Angry Birds. Angry Birds Friends is free to download on Google Play.