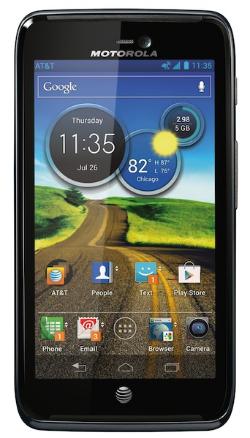 AT&T customers interested in a powerful new 4G LTE smartphone can look no further than the recently announced Motorola ATRIX HD.  Previously leaked several times, the ATRIX HD is now official with specs, pricing, and release date in tow. First, let’s begin with the specs, and the ATRIX HD picks up right where the ATRIX 2 left off.  It sports a 4.5 inch touch screen HD display, Android 4.0, 8MP rear facing camera, 1.3MP front facing camera, 1GB of RAM, 1.5GHz dual-core processor, 8GB of onboard storage, and a 1780mAh battery.  In terms of pricing and availability, the 4G LTE superphone on AT&T will officially launch on July 15 for $99 on a two year contract. Interested customers will have to make a tough decision between the ATRIX HD, Galaxy S III, and the HTC One X.  My recommendation is to wait until the early reviews are published in order to make an informed decision.