A company by the name of BlueStacks has a popular application on their hands. Today the BlueStack Android player was revealed to have reached the download marker of 10 million. The BlueStack site launched back in March and they have reported that the first 4 million of theses downloads came within the first quarter of the year. These numbers show us that there is considerable interest in utilizing Android Apps outside of the normal operational scope of devices. 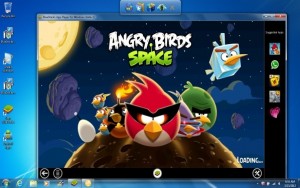 The BlueStack Android app player is a program available for most major operating systems. The Android App Player creates, through the use of its “LayerCake” technology, an environment for our PCs and Macs that will allow the use of the same Android Apps that we use on tablets and smartphones. We have all wished at some point we could use our favorite Android app while sitting at our desktop or laptops. BlueStacks Android App player bridges the gap between the devices. BlueStacks CEO Rosen Sharma was quoted saying, “Our story for the past year has been simple: We take the best of mobile and bring it to other devices. We’re as amazed as anyone by the traction and look forward to bringing mobile content to an even broader set of platforms.” With 10 million downloads under the BlueStack belt we can be pretty sure that we will be seeing a steady increase in the integration of Android Apps across a wider array of devices in the future. &nbsp; Source- venturebeat

Android Powered Monitor on the Horizon?
Hope: Other Side of Adventure brings a different kind of Adventure Game to Android