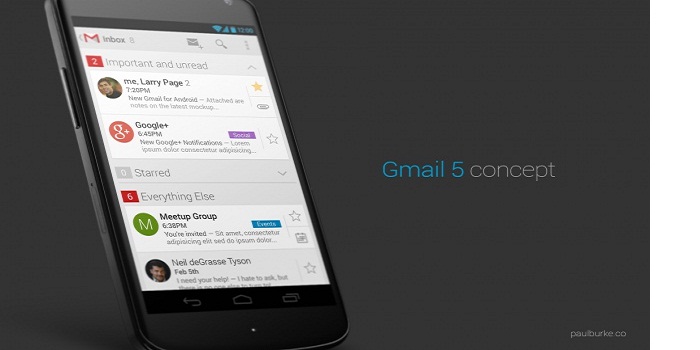 A few weeks ago a Brooklyn designer created the concept art for a possible Gmail user interface make over. For Android users Gmail is an essential app that often creates the backbone of one Google user experience. Having a Gmail account is important because without one the full functionality of Google features cannot be realized.  The current user interface for Gmail is solid and 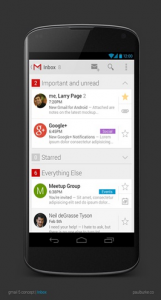 has remained the same for quite some time. This new idea of what Gmail could look like in the future is a refreshing reminder of how our technology evolves and grows to meet our needs. What is somewhat strange is the fact that Google has already presented iOS users with a new Gmail UI. This is bizarre because Google has yet to offer a new change to the users of its own Android OS. In response designer Paul Burke from Brooklyn has decided to present us with a concept of how he feels a new UI for Android Gmail could look.

Paul’s idea combines the Google Now and the iOS version of Gmail to deliver a slick and more intuitive look to the Email app. It appears that the new UI concept presents less mail on the screen but allows a more direct manipulation of attachments, calendars and mail prioritization. It should be noted that spartan aspect of this concept will also change the amount of touching and swiping that is required to navigate the mail, messages, attachments and calendar items.  Keep in mind that this is just a design concept and has not been coded. It is refreshing, however, to see an expression by a designer that gives voice to what we expect as users. Hopefully Google might take a few notes here and develop a concept of their own.

The Best New Android Apps of the Week – April 14, 2013
Blackberry Winner in an ‘I Will Never Buy’ Poll