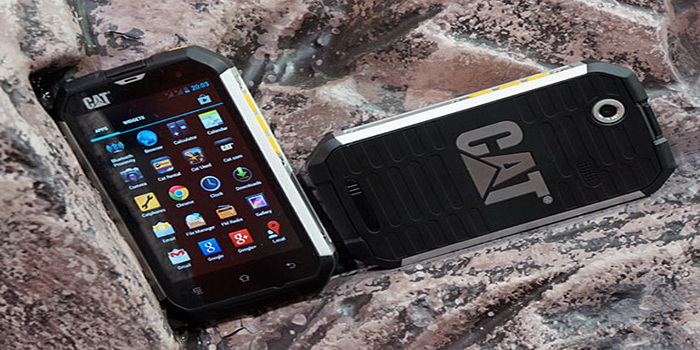 The well known heavy equipment manufacturer just announced its entering in the IT world with its first smartphone running Android OS, the CAT B15. Being a CAT made product, as you may imagine, this CAT B15 is impossible to break, as it was built to be used in the harshest conditions imaginable. The first rumors about the CAT Android running smartphone appeared in February and now it’s ready to go hit the cities in North America. As Caterpillar describes is, this baby was created to be “”most progressive, durable and rugged device available on the market”. Sony, Nokia, Samsung, watch out, there’s a new roughneck on the block! The CAT B15 is designed to resist to dust, shocks,scratches, nuclear war and bio-hazards. Caterpillar claims the phone will survive a drop from6 feet high and it can hold its breath underwater for half an hour, submerged three feet under. These seem like pretty cool specs for an Android running smartphone. Getting over its physical capabilities, let’s be serious for a moment and take a look at the tech specs. The CAT B15 sports a 4 inches wide LCD touchscreen that can be used when your fingers are wet and it can survive temperatures from -4 to 131 F. The screen resolution is WVGA 480×800 , is supports Multi-Touch and it is protected by Corning Gorilla Glass. The Android version is JellyBean 4.1 running on a dual core 1 GHz processor, more precisely a MediaTek MT6577 Dual 1GHz Cortex™-A9  and it has 4 GB of internal memory and it is expandable via micro SD cards. In terms of multimedia, the CAT B15 comes with a 5 Megapixels camera capable of HD videorecording at 720p. Its dimensions are 4.9 x 2.5 x 5.9 inches and weighs 5.99 oz. Taking into account its online price tag of $349, this baby looks like a winner, I always wanted a Caterpillar phone but I never thought I could have one some day. Source: Business Wire &nbsp;