The Humble Bundle has brought us a lot of great Android Games, and most of them have become available on Google Play after the sale is over. Crayon Physics Deluxe has been one of the only holdouts, and that ended a few days ago when Kloonigames finally gave the award-winning game a wide release. 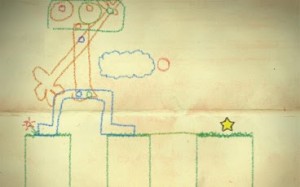 Crayon Physics Deluxe is the crème del a crème of doodling games as it allows you to take on brain teasers or play in the sandbox. Whatever you draw will be transformed into real objects, and there are several different ways to solve each stage. If you just want to create you’re free to do that as well with Crayon Physics Deluxe’s Sandbox Mode. I’ve spent just as much time in the sandbox as I have with the levels and it’s a great way to kill some time if you just want to veg out for a while. It’s not about finding any solution, it’s about finding the awesome one. You’ll see those words before you get into the game, and they certainly ring true in Crayon Physics Deluxe. It’s a great game for kids or adults, and creativity is the key to having a good time. No free version is available, but the full version is well worth its $2.99 price tag. You can pick up Kloonigames Crayon Physics Deluxe on Google Play.

Google Glass teardown reveals that the device is powered by a 570mAh battery
Is Samsung developing robots?