DoubleTwist Android App – A media player with a twist 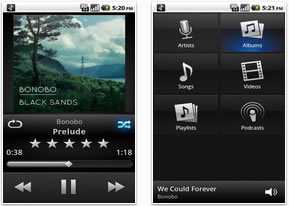 DoubleTwist Android app, a new twist (I couldn’t help myself :P) on the traditional media player for your Android powered phone. First thing I had to ask myself is, “Why the hell does Android need another media player app? There’s like 100 of them!” Well there aren’t 100 media players on the system (I think there’s 99, lol), but there is still way too much. The Market Place is saturated with tons of apps that all seem to be slight variations of one another and some blatant copies, but this one seemed to start with a fresh outlook. It has all the functionality of a traditional media player while also working well as a counterpart for iTunes-like syncing. Since Apple is still acting like an over grown child and not producing apps for competitors (especially Google), Android programmers have to come come up with ways to work around the Cold War. In comes DoubleTwist to save the day with it’s ability to sync with your iTunes library and even import settings like song ratings. The media player can work with many kinds of files like aac, mp3, mpeg 2 through 4, avi, png, jpeg, and more. It can even work on both PCs and Mac (sorry Linux users no native support) without even flexing a muscle. I will say it crashed on me once because it was missing a file from the installation but a reinstall got it up and running no problem. Overall this is a pretty handy little program if you’re looking to make your iTunes library work with your Android phone. It’s easy to use and looks and feels quite similar to the Android Media Player with the added benfit of easy syncing to iTunes. What more do you need?