Full Fat Games entered the realm of freemium titles last week when they released their first free game called Agent Dash. It’s to be expected as a lot of companies are going that route, but what’s unexpected is how damn fun Agent Dash is as its hands down one of the best Endless Running games I’ve played.

Agent Dash lets you step into the role of a Tuxedo wearing super-spy and puts you to work as you try and destroy as many enemy bases as possible. You’ll have to sprint, jump, slide, and use all your wits to get through the tricky world and this endless runner even lets you shoot! Now we all know that any good Spy has to have a few cool gadgets, and Agent Dash is no different. You’ll get help from jetpacks, and parachutes among other things, but you’ll also be able to call in the HQ for a little help in the form of a back-up agent if things get a little too intense. There are plenty of cool things to unlock, and some very cool characters and costumes like Jawbone and Catgirl Goodtug. If you’re the record setting type, there are plenty of objectives to complete and the game tracks your stats as well as let you play against friends via Facebook. 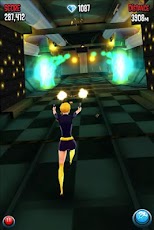 Personally, I think Agent Dash is one of the best looking Running games I’ve ever seen and it’s slowly becoming my favorite. The production values are over the top and put similar games to shame as Agent Dash looks like something Pixar would have created, and the characters remind me of The Incredible which is definitely not a bad thing at all. I’ll sum this one up by saying Agent Dash is an awesome game, everyone should try it at least once, and it’s the type of game you want to show off. The game looks outstanding on my new Galaxy S3, and it runs flawlessly. You might as well uninstall Temple Run after you play this bad boy, because it leaves its competitors in the dust. You can snag Agent Dash on Google Play for the low price of free!