If you dig simulation games of the Kairosoft variety you’ve probably already heard of Epic Pirates Story. It’s a pirate themed sim a lot of us have been waiting for, and a few days ago it braved the wild buggy waters and sailed in to the play store. Are you ready to take on the evil Pirate King Blizzardo? 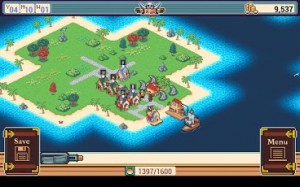 Epic Pirates Story puts you in charge of your own band of pirates as you take on missions and take revenge against the treacherous Blizzardo. The game uses building and battling to keep you busy, and one of those is more prevalent than the other. Guess which one? While some simulation games keep you waiting in the wings for action, Epic Pirates Story does the exact opposite. You will have to build your little pirate town from scratch, but there’s always a battle waiting anytime you’re ready for some action. Epic Pirates Story has been a blast so far, but I am a little concerned about the depth and replay factor as it feels like it may be a short game. I’ll let you know how that pans out in our full review next week, but I do recommend checking it out for yourself in the meantime. If you’re ready to hit the high seas you can pick up the trial version of Epic Pirates Story for free, and if you like what you see the full version will only set you back $1.27.