Evernote has just pushed the latest version of its Evernote Android app adding three major features that will make the app even more exciting and useful. Now in version 3.3, the Evernote Android app now lets you share notebooks right from the app, improved Skitch integration with Evernote and a dedicated widget app for those who failed to install it using the previous version of the app. Sharing notebooks right from the app makes the app even more useful for working with colleagues and classmates anytime. To share a notebook, all you need to do is to go to notebook list, tap and hold a notebook and then select sharing settings. Then you can start sharing any notebooks that you’ve created either with individuals or with the public, if you wish to. Additionally, for Premium subscribers, the app also not lets you allow others to edit your notes. Revoking access of people is now also easily accomplished. The app’s annotation mini-app called Skitch was also made easier to use than before. To use the annotation feature just tap an image in Evernote note view or slideshow view, open it in Skitch, annotate and then save it right back to Evernote. Then you’ll be asked to replace or append the image to your notebook. Finally the updated Evernote Android app gives you a small or big option for the widget that you want to use on your home screen. The Evernote widget lets you create text, audio and snapshot notes. It also lets you jump easily into the search screen. For the larger widget, you can even view your most recent notes. 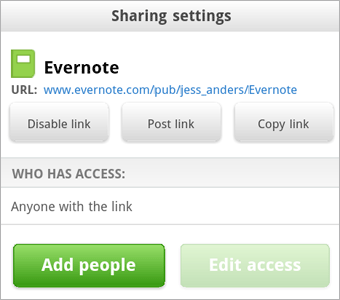 The Evernote Android app is available now as a free download from the Android Market.