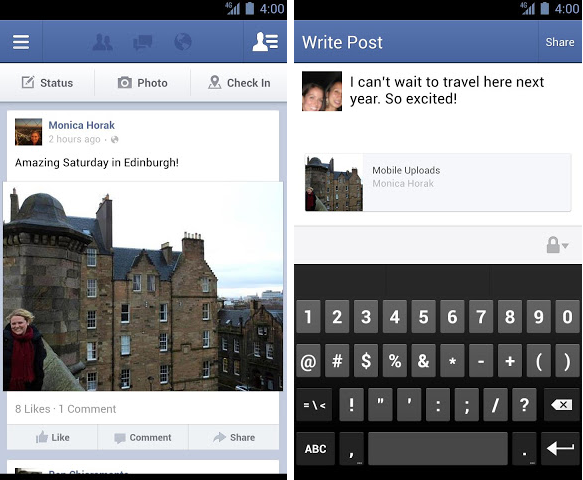 While iOS users continues to enjoy a very solid Facebook app on their devices, Android fans are still waiting for the time when the Facebook Android app will improve and be at par with its iOS counterpart. Fortunately, Facebook is not neglecting their Android app and has been continuously improving it. The latest of these improvements has just been pushed to the latest update of the Facebook Android app. The update brings in several nifty features, foremost of which is the new sharing feature. This is similar to the sharing functionality which most of us are using on Facebook.com.  So now you can easily share stories on your news feeds using the Share tab. Aside from the sharing feature, the updated Facebook Android app also now lets you create an album from the Photos tab on your Facebook Timeline. Additionally, photo tagging was also improved. And of course the usual round of fixes for bugs were also carried out including the status update failure experienced by some users in the previous version of the app. You can grab Facebook Android app from Google Play for free, right now. &nbsp;