While Mozilla may have been slow out of the gate to release their popular desktop browser Firefox as an Android app on the Android platform, Mozilla are making up for this by continually updating the Android app and improving it even more in each new iteration. Slowly it is now catching up to the Dolphin browser and Google’s own Android Chrome app. One area that the Firefox browser app wasn’t quite perfected was the way it looked on tablets. That issue however is now addressed as Mozilla have updated Firefox to version 15 and it is now optimized for Android tablets. 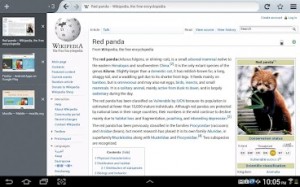 As well as updating the app to be optimized for tablets, there are general speed improvements as well. Page load times and even the start up time have been improved significantly. There is also a new feature in the Firefox app called ‘Awesome Bar’ which is sort of like a personalized home screen. From the Awesome bar, you can bring up your browser history and bookmarks quickly, as well as your form data and passwords. Other changes in Firefox 15 for Android include the ability to import bookmarks and history from the stock browser on your phone, the ‘find in page’ feature. You can

also request the desktop version of sites and tabs can be now be closed by swiping them. Issues with text selection has also been fixed in the latest version. The Firefox Android app is free to download and you can sync your data from your PC Firefox application.