Firefox Beta for Android Updated with Do Not Track Privacy Feature 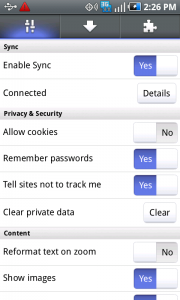 If you’re using Firefox Beta as your Android phone’s web browser, you might want to update your Android app now as Mozilla just released an update. The update adds this so called, “Do not track” privacy feature which basically tells the website that you are browsing on your phone that you want to opt-out of online behavioral tracking. Hence giving you more control over the way your browsing behavior is tracked and used online. To enable the Do Not Track feature once you have downloaded and installed the latest beta build of Firefox for Android, simply go to preferences and located the Do Not Track switch. Once turned on, Firefox on your Android will function like the desktop Firefox browser – that is everytime Firefox loads a web page, image or advertisement, it will include a “DNT:1” signal. The idea for the inclusion of the said feature to Firefox Beta for Android was explained by Mozilla Privacy Engineer Sid Stamm who believes that the mobile web should be the same as the desktop web. And one way of establishing consistency is by way of this “Do Not Track” feature. Firefox Beta app is available as a free download from the Android Market. via Mozilla Blog