If you’re a fan of FX’s awesome Television show Sons of Anarchy then the Sons of Anarchy Android App is an app you’ll definitely want to check out. The app has been out for a while now, but recently received a new update last week. That coupled with the fact that the show has really amped things up lately (RIP – *****… I won’t spoil it) made me think it was time to do a review of the app so here we go with a quick jaunt around the Sons of Anarchy Clubhouse. 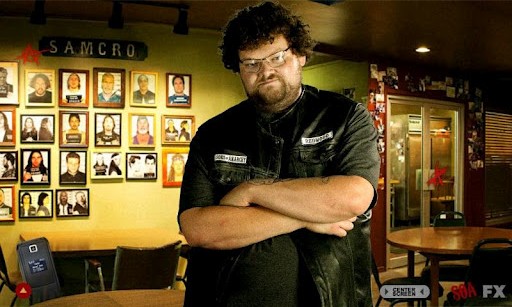 Getting around in the Sons of Anarchy app is intuitive and quite a bit of fun as you actually get to move about the insides of the clubhouse. Anything you can interact with has a red Anarchy symbol on it, and there are quite a few sections to interact with. You’ll start out in the main area, but after going into the kitchen and meeting an old fingerless friend you’ll get a wider view of the clubhouse and all it has to offer. The Private door lets you have a look inside of Happy’s locker and gives you access to some moments the club had while the MC was in prison in season 4. There are several different comics you can look at that give a little backstory on folks like Otto, and places like Charming & Stockton. Some of the other things you can look at are Jax’s mugshot, the SOA prospect rules & duties, storyboards, facts from the show, and you’ll even get access to alternative scenes and appsidoes. There’s also a bit of trivia from an upcoming board game which I didn’t even know existed until now, but will be picking up. If you’re into swag the Sons of Anarchy app also has a nice shop section where you can buy things like wallets, rings, hoodies, and jeans. You can use the apps “Second Screen” function to sync with the broadcast of season 5 or season 4’s DVD/Blu-Ray release to shop some of the items you see on the show as well. I haven’t had a chance to try it out, but will try to do so tonight when SOA is on.

Overall the Sons of Anarchy app is pretty damned cool, and it’s an app that fans of the show will appreciate and enjoy. I like the “Perspective” view of the clubhouse although you can turn it off or navigate the old school way if it’s not for you. I may be a little biased as a huge fan of SOA, but I think they did a great job with the app… especially compared to other shows that “try” and give their fans a mobile experience. If you want to give the Sons of Anarchy App a go you can pick it up for free on Google Play, and be sure to tune in tonight to catch the latest episode of Sons of Anarchy on FX.
Posted by admin