If you haven’t heard of the new Extreme Sport known as XARM, you’re not alone because I had never heard of it either until I saw the XARM Android Game. XARM is the brainchild of one of the founders of the UFC, and it’s one of the more bizarre Extreme sports out there to say the least. 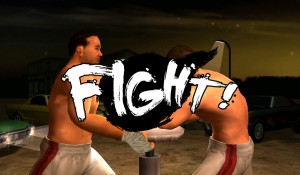 XARM is a mix of extreme arm wrestling and MMA where you basically arm wrestle while beating the hell out of each other. Opponents have one of their hands tied to the other fighters hand, and when the bell rings chaos ensues. It is setup on an arm wrestling table, but you’re allowed to strike, kick, grapple or go for the arm wrestling style pin. I’m sure there are a few more rules, but that’s the gist of it. As for the XARM Android game it’s actually quite good. The graphics are solid, the gameplay is pretty intense and bloody, and there seems to be quite a bit of customization for your fighter as well.

XARM is definitely an interesting sport, and they’ve put out what seems to be a solid game. I wanted to play this on my Galaxy S3, but had some force close issues. It did work on my Asus 300 tablet running Jelly Bean though, and it ran & looked great. As a fan of combat sports I feel it’s my duty to take a closer look at XARM so check back later in the week for a full write up. If you’re ready to pin a few wrists and bust a few faces you can head on over to Google Play and pick up XARM for free.