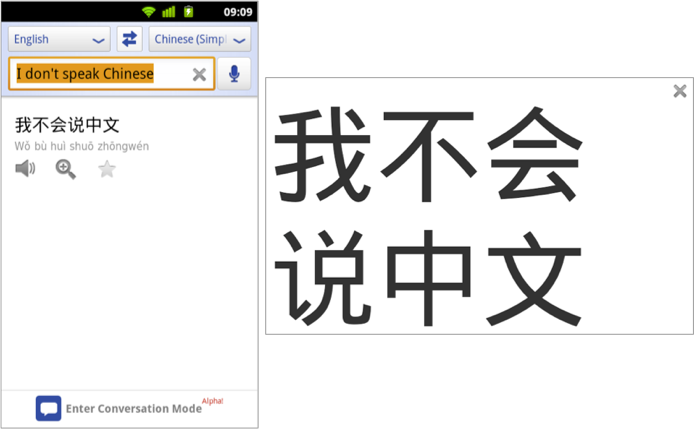 As I mentioned in previous post, SIRI is really cool voice-assisted feature that will surely rock the mobile phone industry. While this is nothing new to most Android apps, Apple has successfully marketed and promoted this during the launch and has since then elicited much anticipation. Google, on the other hand want to take a crack a bit of this excitement by updating its Google Translate Android app to enable speech-to-speech translation. So, after updating the app if you’ve installed it before, you can now speak out the words that you want to translate in another language and the app will translate it in real-time and speak out the translated version as quick as it can. Pretty cool, right?  The new Google Translate feature called Conversation Mode allows you to converse with another person in his own language easily. It covers several foreing languages right now with Google adding some more including – Brazilian Portuguese, Czech, Dutch, French, German, Italian, Japanese, Korean, Mandarin Chinese, Polish, Russian and Turkish. Of course, Google was quick to add that the new feature is in alpha stage right now. Meaning, don’t fret out when the app will not be able to translate what you are saying perfectly. There are other factors that will affect the app’s performance such as background noise and regional accents. Similar to SpeakToIt Android app, you can now also lets Google Translate display its translation so that you can still edit it out before letting the app give you the final translation. Google Translate looks pretty good right now. But of course, it could be better and hopefully Google is working on these enhancements. Google Translate is available now as a free download from the Android Market.