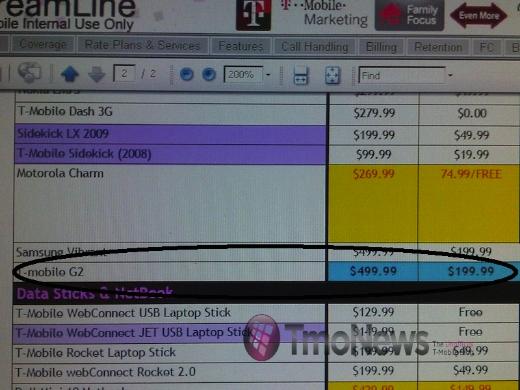 T-Mobile has already teased us with the T-Mobile G2 being its first HSPA+ capable device, but other details such as pricing and availability have not yet been announced. While the rumored launch date for the device is September 29, we still have no idea on pricing at this time. Most new, high-end smartphones sell for $199 on a two year contract, and it looks like the G2 will follow suit. According to a leaked screenshot of T-Mobile’s internal system, the T-Mobile G2 is set to launch for $199 with a $50 mail in rebate on a two year contract and is available for $499 off contract. Of course, we’ll have to wait for official word from T-Mobile before we can confirm this rumor, but I have no reason to not trust this is the official pricing.