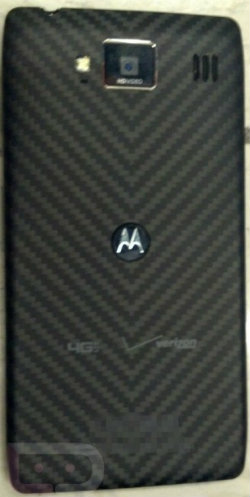 Yesterday, images of the rumored Motorola DROID RAZR HD were leaked to Droid-Life.  The DROID RAZR HD is undoubtedly the successor to the Motorola DROID RAZR series and should be a nice addition to Motorola’s 4G LTE portfolio on Verizon Wireless. The leaked image does confirm a few things, but the screen size and exact resolution is still a mystery.  Since HD is in its name, the screen will likely be a 1280 x 720 resolution display, but the size is unknown.  Judging by the image, the backside is entirely cased in Kevlar to offer increased protection against drops and shocks.  In terms of processing power, it is rumored to boast a 1.5GHz dual-core processor of the S4 variety.  RAM will likely be 1GB, which falls short to the Galaxy S III’s impressive 2GB offering. The 3300 mAh battery will likely remain the same from the DROID RAZR MAXX to the DROID RAZR HD.  Motorola will want to keep its hottest feature in the smartphone market present in as many of its devices as it can.  We can even glean the Verizon 4G LTE logo from the backside, so we know it will operate on Verizon’s blazing fast 4G network. Lastly, it will launch with Android 4.0 on-board and probably some sort of MotoBlur UI.  Here’s to hoping Google aids Motorola in the software aspect so we can get a clean UI as possible.