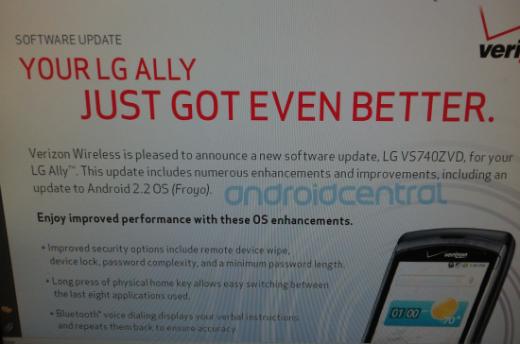 One of the older, mid-range Android devices on Verizon Wireless, the LG Ally, is about to get some Froyo love as a leaked Verizon Wireless document claims Android 2.2 should be available shortly. AndroidCentral published the leaked image, which states Verizon Wireless is pleased to announce a new software update VS740ZVD, which brings several enhancements, but most notable is Android 2.2. We have heard about the LG Ally receiving Android 2.2 in the near future for quite some time now, and it looks like everything is set to go and we are just waiting for Verizon Wireless to push out the software update. As with most OTA Software Updates, it will probably take at least a week for every LG Ally owner to receive the update.