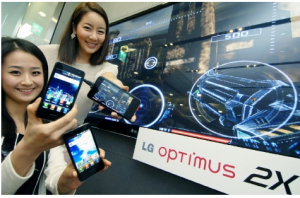 A rumor started a couple of days ago about this new LG Android smartphone previously known as LG Star. Well, look what we’ve found here – that said smartphone has just been officially announced by LG Korea and it will bear the name LG Optimus 2X once it hits retail stores. And guess what this Android brings to the table? – A dual-core processor that will surely blow your minds because of its fast processing power. With that, the LG Optimus 2X becomes the world’s first smartphone to have a dual-core processor. To be exact that processor happens to be the Tegra 2, which is capable of faster, smoother web browsing and app running, aside from multitasking capability with practically no screen lag. Aside from those features, the LG Optimus 2X will also offer full 1080 HD video playback and recording, HDMI mirroring, DLNA compatibility, accelerometer, gyro sensor, rear and front-facing camers, microSD memory support, micro-USB port and a 15000mAh battery pack. For specs we’ve got 1GHz dual-core NVIDIA Tegra 2 processor, 4-inch WVGA screen, 8GB memory on-board, and 8MP rear camera and 1.3MP front camera. For OS, it will come pre-installed with Android 2.2, upgradeable later on to Android 2.3. Pretty exciting Android phone, right? The LG Optimus 2x Android phone will be available in Korea next month. European and Asian release will follow right after. Sorry folks, no pricing details yet. via LG Korea