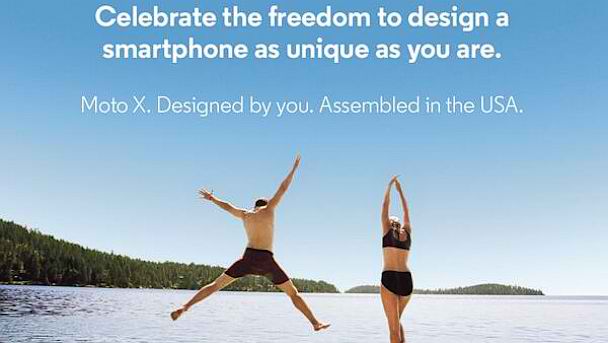 Some major dailies published a Motorola advertisement yesterday about a U.S.-made smartphone that it plans to release soon. Today, ABC news obtained some details about the said device. Aside from the now known fact that it be assembled in the U.S., the Motorola Moto X will feature a fully customizable look and appearance using different colors and even engraving. The customization will be done via a website which Motorola will announced later on and will let buyers of the handset to personalize how their unit will look like before Motorola delivers it to them. That’s going to happen within days after placing an order for the device. Buyers will have to visit the Motorola website and select the colors they want for their Motorola Moto X. Two colors can be selected, one to be used for the unit’s back case and the other for the phone’s trimmings. In addition, buyers will also be able to have the phone engraved with their name or message and upload a photo that can be used as wallpaper. While that can be easily done as soon as you have your unit, it will still look cook if upon unboxing your unit, the personalization that you want is already applied to the phone. One of the coolest features that the Motorola Moto X will have has to be the ability to launch the camera app by flicking the phone. The Motorola Moto X will also feature advanced voice recognition technology as well as the ability to automatically set itself to speakerphone function once it knew that you are driving. Sounds cool, right? Incidentally, the Motorola Moto X will be running Android 4.2.2, a new Android flavor which is still being tested by U.S. carriers such as Verizon.