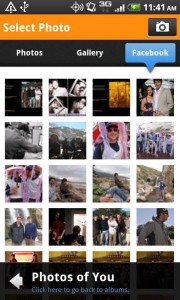 Previously available for iOS devices, Postagram is a pretty nice app that lets you order printed copies of photos you’ve captured using your phone. For iOS devices it was meant to be used for Instagram photos. But since Instagram is not yet available for Android, Postagram for Android makes use of the photos in your Android phone’s photo library. This is a great app to use if you want to send postcards to your friends and family using any photos residing on your Android phone. It’s a pretty cool service and I couldn’t help but applaud the developer especially for using Instagram. I’m not really sure though whether it will get the same interest among Android phone users. But we’ll see about that. Anyway, the app is also a camera app. Meaning you can take a snap shot of anything using the app’s camera function and then quickly request to have that photo into a “postagram” to be sent to a friend or family member. Postagram are printed on thick, glossy photo postcards at 300 dpi resolution. Delivery cost is at 99 cents, that’s anywhere in the world. If your recipient is in the U.S., delivery of the postagram takes 2-5 business days but if you somewhere else in the world, delivery will be a bit longer. Each postagram you send can contain your personalized profile photo and can have as much as 140-character message. Lastly, Postagram works with other Android photo sharing sites such as QuickPic, picplz and others and it also supports Android photo editing apps such as Vignette, PicSay, Postdroid and more. This means that you can have any photos from those apps printed and send to you via the app. Postagram is available now as a free download from the Android Market. via Techcrunch