Punch Quest was a hit when it arrived on iOS last year, and today Android gamers can finally see what all the fuss was about thanks to a port from the fine folks at Noodlecake Studios. Ready to punch some monsters in the face? 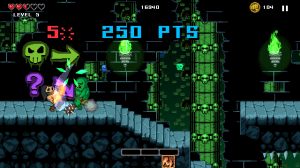 Punch Quest is an old-school Arcade brawler that puts you to work laying out enemies’ one punch at a time. As the game is an Endless Runner of sorts, you don’t have to deal with anything but punching and stringing together combos. You’ll bash monsters with only two-buttons; one will throw a mean uppercut while the other handles jabs. The name of the game is Punch Quest, so you have to expect some quests thrown in with all those punches. The game certainly doesn’t disappoint in that department as there tons are mini-quests to complete during your runs, and lots of cool unlockables. Needless to say, there’s a lot more to the game than what we’ve covered in this brief write-up. We knew Punch Quest was coming, but we weren’t sure when so the game kind of snuck up on us early this morning. While I only got to spend about 10 minutes with the game, it was enough for me to let you know you’ll want to pick it up. It’s a great game, and extremely hard to put down once you start punching things in the face. We’ll have a full review of this one next week, until then we highly advise you to head on over to Google Play and pick up Rocketcat & Madgarden’s Punch Quest. It’s only $0.99, and you’ll definitely want to clear up some free time before you fire it up.