Samsung has announced that it’s Wi-Fi only Galaxy Camera is now available in the U.S. The Galaxy Camera has made its debut at $449.99 at Samsung authorized retailers and $499 through AT&T. Verizon will also be offering a 4G LTE version that will carry a heftier price tag at $549.99. The Wi-Fi only Galaxy Camera is an, Android powered device that is essentially a camera built on the foundation of the Galaxy cellular model. From first looks the Galaxy Camera seems to be a Galaxy phone with a large lens. The Specs for the Galaxy Camera include the Android 4.1.2 Jelly Bean operating system, a 1.4GHz quad-core Exynos CPU, a 720p LCD screen, and 1GB of RAM.  If you look closely these are the same specs for the Galaxy phone. The difference maker is the inclusion of a 12-megapixel lens with 21X optical zoom. Samsung has decided to offer this package in a Wi-Fi only model in an attempt to lower the price point and essentially make the Galaxy Camera available to more users. The question remains however is the $50-$100 difference enough of a price break to entice cell phone users to consider a dedicated camera as an alternative? 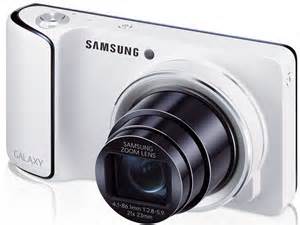 The Wi-Fi Galaxy Camera uses the Android 4.1.2 Jelly Bean operating system to give social media inclined photo enthusiast a powerful point and shoot camera with all of the benefits that come along with the Android OS including the Google Play store. Essentially a user can take high quality photos, find and connect to a Wi-Fi host, and, in turn, use the available downloadable Google Play store apps to post pictures directly from the camera instead of having to upload or sync to a laptop or computer. This basically means Samsung has removed the middle man from the sharing of high quality pictures. The Galaxy Camera features a cell phone like touch screen interface, content manager, and editing tools. Like most dedicated point and shoot cameras the Galaxy Camera will also boast changeable environment settings such as outdoors, portrait, and sports. The Wi-Fi Galaxy Camera is a powerful device that will in the end make users have to consider which is the most convenient tool for the pictorial occasion. Source-Android Central