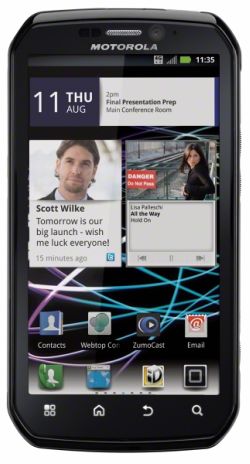 Motorola is making a claim to fame on the Sprint network as it prepares to launch the previously unheard of Motorola Photon 4G. The new Android superphone on Sprint boasts a 4.3 inch qHD screen, 8MP rear facing camera, VGA front facing camera, a dual-core 1GHz NVIDIA Tegra 2 processor, Android 2.3, worldphone capabilities, and webtop accessories. Of course, the Photon rocks 4G speeds since it comes with support for Sprint’s WiMAX network. Essentially, the Photon 4G is Sprint’s rendition of the Atrix 4G, or even Verizon Wireless’ Droid Bionic. The Photon represents Motorola’s first 4G smartphone on the Sprint network, and the Photon looks to join the ranks of the EVO lineup as the flagship device of Sprint. It is slated for a launch this summer, but we do not have any details regarding pricing at this time.