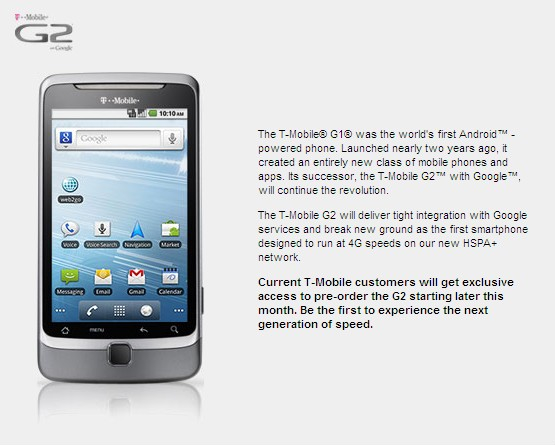 Finally, all rumors and leaks about T-Mobile and HTC’s follow-up to the first Android phone release, the T-Mobile G1 should now be put to a rest. T-Mobile has officially announced the coming of the G2 Android phone. In fact, a pre-order page has already been put up. So, if you’ve been waiting for this Android phone, stop for awhile, check out the T-Mobile G2 sign-up page and then go back to reading this post. So, what are the official specs and features that the T-Mobile G2 will bring to us all? We’re talking about 4G download speeds here, folks. It is said to be the first smartphone to specifically run on T-Mobile’s new HSPA+ network or 4G. That makes this Android phone sort of ground-breaking according to the press release. Design-wise, the T-Mobile G2 is basically an HTC manufactured phone. So, expect to see striking resemblance to previous HTC phones that were released in the market. The phone sports a large 3.7-inch screen, full QWERTY keyboard. The phone also runs on Android 2.2 and offers seven customizable home screen panels including a dedicated panel with one-click access to Google apps and the Android Market. Other specs and features of the T-Mobile G2 Android phone include – Snapdragon MSM7230 800MHz mobile processor, HD video camera (720p), 5MP camera with LED Flash,  Adobe Flash player support, pinch and zoom functionality, 4GB internal memory, micro SD support up to 32GB, and SWYPE text input. So, there. If you haven’t signed up yet, you can go ahead and do so now. Make sure that you are an existing T-Mobile customer. If not, you will have to wait till the phone is officially released anytime this month.