This great game crept into the market at the end of last week, and I just ran across it a few days ago. Apparatus is a superb building game, where you’ll get to build all kinds of wacky looking machines. There are plenty of levels, a sandbox mode, and community levels for you to download as well. There are lite and free versions of Apparatus available in the Android market for download. It’s a really a fun game, and if you’d like some more information you can read our full review here. 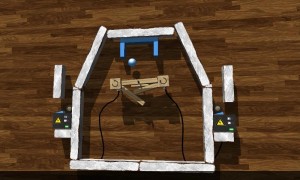 Pizza Lovers the world over are happy this week, as Pizza Hut has released an Android App into the market. This handy app has Pizza Huts full menu, and you can place your order from your Android device. If you already have an account, you can view your previous order which makes ordering your favorite a breeze. They also have guest checkout, so you can securely order a pizza on the go. This will definitely be a popular app on my phone, and I’m sure we’ll see the other Pizza places follow with apps soon.

Gurk II is a great retro RPG game. If you played the original Gurk, you’ll be thrilled to see part deux. It’s got those old school 8-bit graphics, and well… it’s just plain awesome. If you’re a fan of retro gaming, you definitely need to checkout Gurk II. There isn’t a free version, but if you want some excellent 8-bit fun 99 cents is a small price to pay.

Chess Chess is a new game from developer Italy Games, and it’s all about Chess if you couldn’t figure it out by the name. It is two-player, so you can play against the chess-bot, or against a friend. The AI has 5 different levels of difficulty, and will definitely keep you on your toes. Chess Chess is free to download in the Android market.

Sillycube put out a pretty neat game this week called Paper War for 2 players. Paper War is a set of mini-games that two people can play from one device. You get three game modes which are Shoot Mode, Cannon Mode, and Tap Mode. The graphics are in “Doodle” style, and they work very well with the game. If you’d like to give Paper War for 2 Players a try, you can grab it in the market for free.

Fly Boy is a fun new game from Developers Feeling Touch Inc. In this game you take on bad guys from above, and below. The controls are simple, just hold the screen to fire, and slide your finger to move the plane. There are several power ups as well with names like bomb, speed up bullet, and my personal favorite…”Enlarge attacking scope. “ You can pick up Fly Boy for free in the Android market.

MegaBrain will put your mind through a series of tests, and give you your Brains Bpu (Brain Power Units.) There are a lot of different training exercises/games that will test and improve your memory in several different areas. Some of the areas tested are Memory, Attention, Metal Flexibility, and Intelligence Quotient. The games are for all ages, so whether your no matter you age, you’ll be able to train your brain.

If you like “find the difference” type games, you’re going to enjoy Doodle Hunt. In each stage the screen will be filled with objects, you’ll have to find/touch the items as it asks for them. Your competing against the clock as well, so the quicker you can touch 8 couches, the more points you’ll get. Each stage represents a room, and the items you’ll have to touch will be related to the room. There are over 20 stages, and well over 300 items in the game. I wasn’t sure what to think of it at first, but ended up liking the game quite a bit. There isn’t a free version available right now, but you can get the paid version for .95 cents.

A lot of people are going with the new 4g phones, especially the new Thunderbolt, Charge, and the Revolution. Some of you have found out that 4G LTE can drain your battery very quickly. Now you can combat that with LTE Switch. This app lets you use the necessary menus to quickly turn off 4G when it’s not needed. Great app for those of you lucky enough to have that new Thunderbolt!  You can get LTE Switch for free in the market.

Last but not least this week, we have Dart Ninja. Dart Ninja is a fun puzzle game where you use your finger to “slash” your way through the puzzle. The gameplay is a bit different, but fun and there are over 50 levels to check out. I wanted to put this higher on the list, but the ads were poorly placed and took away from the game a bit. It seems to be a solid game, so I’m sure they will get the ad issue fixed soon. If you’d like to give Dart Ninja a look, you can find it for free in the market.