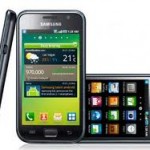 Samsung Galaxy Tab to Retail Between $200 and $300 in US
T-Mobile Gives the G2 Android 2.2 Phone the Official Treatment