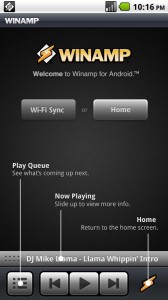 Were you able to download the Winamp music player for Android when we first reported about it? If you haven’t tried using this music player app yet on your Android phone, I suggest you do so now as you will definitely love this Android app. And for those who got the Android app running before, it’s time to hit up the app’s update button as version 1.0 is now available. Running through the new features of the Winamp Android app, you’ll get some pretty nice, and useful ones including – redesigned Now Playing screen, the capability to download and stream free music, additional artist info including music-related news, album art gesturing for track change, redesigned home screen, browsing your music files via genre, redesigned lock-screen player, integration with Android’s “listen to” Voice Action, as well as some bugs and crash issues that were fixed. Overall, the update is pretty much a good one and made Winamp Android  app a much better music player app. Winamp for Android is available as a free download from the Android Market. More details about the Android app can be found here.