Wreak Havoc with a Giant Catapult in Catapult King for Android

There are many iterations of Crush the Castle and the latest comes from the fine folks at Chillingo and Wicked Witch Games. Catapult King is the name of the game, and it’s all about taking out Nasty Knights and dozens of castles. 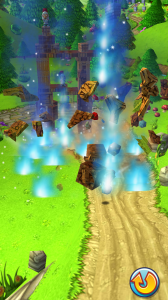 Catapult King is a physics flinger where your sole purpose is out the Nasty Knights that are lurking in and around castles. Why are they Nasty? It’s never fully explained, but they appear to be in cahoots with a Dragon that’s stolen a Princess and your job is to get her back. Using your massive Catapult is as simple as lining up a shot and letting it rip, and as you’d expect some castles are much tougher than others. You complete a level by knocking over all the Nasty Knights, and you’ll earn magic after each level based on how well you do. The magic can be used for powerful shots that can help you crack tough castles; magic can be earned or bought and so far the balance has been great. I’m almost 50 levels in and have yet to spend a dime to complete a level. Well done. Crush the Castle games are a dime a dozen, but Catapult King manages to bring something new to the table with its slick graphics and exploding castles. Knocking over Knights may be your goal, but watching pieces of castles go flying into the distance is a blast and hasn’t gotten old yet. The 96 levels should keep you busy for a while as well and more levels are listed as coming soon. If you want to give it a whirl you can pick up Catapult King for free on Google Play.