A Review of Big Blue Bubbles Hamster Cannon for Android 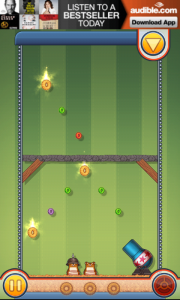 There have been quite a few cannon related games come out over the past year and gamers have shot everything from clowns to aliens from the big guns. This time around you’ll shoot Hamsters out of cannons thanks to the team at Big Blue Bubble. Hamster Cannon is the latest from the people behind the hit game Burn the Rope, and while the two games are different in every way you may see the occasional burning hamster. 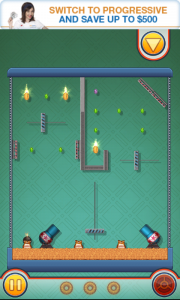 Firing your Hamster is simple as you just need to tap a hamster to load the cannon, drag your finger behind the “aiming arc” to aim, and tap the button to fire. You’ll want to aim your shots for the golden noms, but you’ll have to overcome a lot of different obsticles to get them all. There are moving platforms, spring boards, and walls made out of concrete, wood, and iron so you’ll want to aim carefully before taking your shots. Some of your hamsters can help you out with their special powers given to them by their funky little helmets. Depending on which hat your hamster is wearing you’ll be able to burn and burst through certain materials and blow up others. 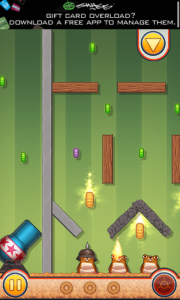 The worlds are laid out in four themed cereal boxes and each box contains 24 levels. New levels are unlocked by completing the last while the worlds are unlocked when you get a certain number of Golden Noms. Golden Noms will unlock levels and worlds, but regular noms (the rainbow colored ones) will get you some sweet gear. You can get 24 different hats, 4 different cannons and several upgrades like aim assist and battery packs. You also have the ability to unlock levels and remove the annoying ads with noms; the ads can be removed for 10,000 noms which is around $2.99 if you buy them and don’t earn any. They are pretty easy to earn, but you’ll have to play forever to snag 10,000 of them. Hamster Cannon keeps track of all your stats and also utilizes the Openfeint scoring system. 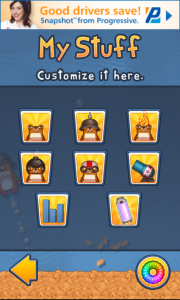 At first I was really impressed by Hamster Cannon, but it didn’t take long before the ads got very, very irritating. This game suffers from ad overkill as you have to put up with a full screen ad between each and every level. Some of them can be difficult to X out of as well which adds to the frustration. The overall theme of the game and the little hamsters with their hats are cool, but the ads tend to kill a lot of the fun as you have to wait between each level. If you like the game enough to pay for it, I would highly recommend you buy/earn enough noms to get rid of the ads. You can find Hamster Cannon in the Android market for free.