A Review of Flick Golf Extreme for Android 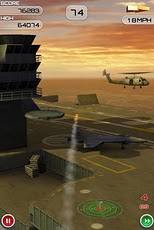 Game makers Full Fat Productions did it again last week as they released yet another awesome Flick Game. They’ve already put out four different flick sports games, and this time around they’ve given us the follow-up to their smash hit Flick Golf with Flick Golf Extreme. 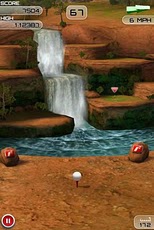 Hitting the golf ball is as easy as swiping your finger across the screen. The straighter you swipe, the straighter the ball will go, and the longer the swipe the longer your shot travels. By swiping left and right you can add unlimited spin to the ball while it’s in the air or when it hits the green up until the 3rd bounce. You’ll also need to take into account the direction and speed of the wind before you swing, because the wind can be a real killer in Flick Golf Extreme. Your score is totaled based on accuracy, spin, bulls eyes, and perfect shots. 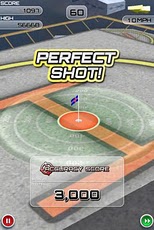 The basic layout of Flick Golf Extreme is the same as with Flick Golf with Quick Shot and World Tour, except you get the 5-ball challenge this time around in place of Quickshot Pro. Quickshot mode pits you against the clock and you’ll need to hit a set amount of points to unlock the next course. World Tour gives you 9 shots per course and medals are awarded depending on your final score. Last but not least, we have our new addition 5-ball challenge. This mode gives you 5 balls to score as many points as possible; every ball that makes it into the cup you get to keep and extra balls are awarded for other achievements. Throw in leaderboards, achievements, and in depth stat tracking and you’ve got yourself a pretty deep golf game. 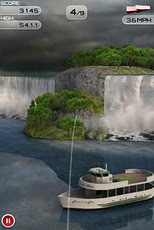 As a fan of the first game, I was thrilled to see this pop up in the market a few weeks ago and it’s been a blast to play. The controls and modes generally stay the same as the original, but the locations are definitely harder. The Extreme moniker fits the game nicely as you’ll quickly find out when you tee off from a moving helicopter or whack the ball from the ledge of a building. Overall, Flick Golf Extreme is an awesome game, and so far it’s the best of the bunch in my opinion. No free version is available, but the full version can be had for $1.99.