A Review of Headcase Games 180 Ultra for Android

180 Ultra is an awesome puzzler from Headcase Games that puts a new twist flip on the tired old genre of Match-3 games. It is a gem matching game with style, and it’s a game that’s going to keep you glued to the screen for hours on end as you try to master the flip and set a high-score… 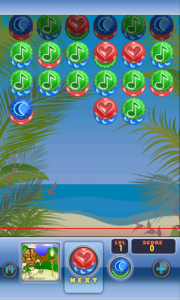 The rules and premise behind 180 Ultra is simple; you shoot two-sided gems towards others on the board and if you match 3 horizontally or vertically they’re removed and you get some points. As you clear gems the game speeds up and if the gems reach the bottom of the screen its game over man… The twist comes into play as all the jewels are two-sided and you can flip the jewels over to help clear a path and rack up some killer combos. Any gem on the board can be flipped and the same goes for the gem in your “next” queue. You can always see what color is on the other side so you can plan a little ahead, and the fact that the game temporarily “freezes” every time you clear a line allows you to use a little strategery. 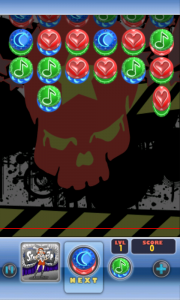 Ultra 180 offers up several game modes for gamers to sink their teeth into with Endless, Score Attack, Time Attack, and Drop Attack mode. Endless mode is pretty self-explanatory while Score Attack will pit you against the clock in a 90 second challenge. Time Attack tracks you to see how long it takes for you to clear 250 gems and Drop Attack has you going against the clock again, but this time you’re going for depth instead of points. The full version of the game also lets you choose between 4 different characters as well, and each different character comes with a unique themed backdrop. Ultra 180 has some in-house stats which I always appreciate and they also utilize the uber-popular Openfeint scoring & achievement setup. 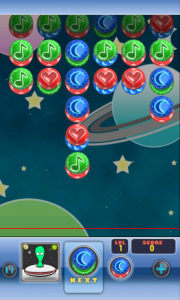 I’ve tested out so many Match-3 type games over the past year that I started seeing jewels in my sleep, the way the game is setup really makes it unique and sets it apart from similar games in the puzzle genre. You can try out the free/demo version of the game simply dubbed 180 or you can pick up the full called 180 Ultra for $3.99.  You can also give the full version a test run on the Android rental service Appscribe. No matter how you check it out, just be sure that you do as 180 Ultra is a game definitely worth looking into.